“Based on official government documents and extensive secondary literature, this book revises several old assumptions on the periods of peace and war. For the 1930s, Pauwels demonstrates that declining female university enrollments were caused neither by Nazi rhetoric nor antifeminist campaigns but by the drastic drop in university-age population and the Depression. Despite their alleged egalitarianism, Nazi social and economic policies favored the access of middle- and upper-class women to higher education. The Third Reich was unsuccessful in creating an auxiliary female vanguard to serve in its leadership or welfare programs and failed to stop women from flocking into law, medicine, and engineering. It was WWII, not Nazism, that gave German women a dramatic improvement in higher education; increased numbers of women for a short time achieved unprecedented freedom and prefessional advancement though at war’s end, these dramatic gains were lost. Extensive charts, notes, and bibliography enhance a well-written concise monograph.” 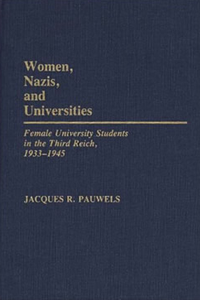